A local business owner and friend recently asked me about sponsoring an upcoming event, Ride for Life. It's a charity bike ride with part of the proceeds supporting autism and part supporting her club’s Christmas project to provide bikes for local kids. Growing up I spent a lot of time with bikes. There was my green Schwinn, with the pink flowered banana seat. Next, came the light blue 5-speed from Sears. Then when the cycling bug bit, I went on organized rides with my Aunt Jane and Uncle Bud, rode the countryside of southern Michigan and northern Indiana after dinner, called Greg LeMond one of my heroes (I have now dated myself) and did a lot of riding with the local cycling club in my hometown. 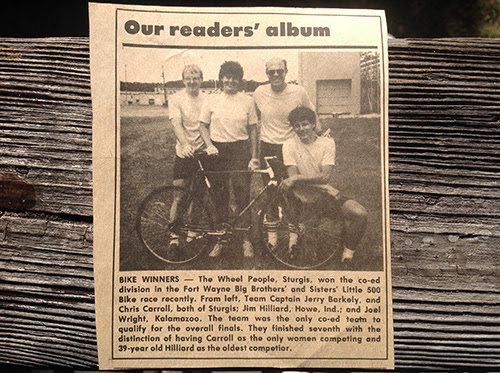 ﻿​Most of that cycling happened on my dark blue Nishiki, I spent a lot of money on that bike and had many miles of freedom on it. How could I say no to kids getting bikes for Christmas? I said yes and made a lot of cookies for the rest stations. With my sponsorship came a free entry and I thought it might be time to dust off the now Cannondale hybrid. My biggest worry was getting my hiney used to the saddle again. Guess what? Life happened and I didn't spend the time in the saddle preparing for the ride. I considered not doing it, I was able to come up with a long list of reasons why I shouldn’t participate. I'm not in shape, I don't have the right bike (my bike has fat tires and a kickstand), I need to shave my legs, I have to work in the kitchen, I need to clean my house. Ok, I'll stop with the list, I could go on.

How many times has this happened to you? The voices in our heads try to keep us from doing the things we want? We give up before we even start? I told those voices to go eat a grocery store cookie and decided I at least needed to show up! I was a sponsor! I would meet some new people, I might even have fun.

The morning of the ride arrived cool and sunny. My only goal was to show up for the pre-ride meeting and ride as long (or short) as I felt like. I was giving myself permission to only ride a few blocks, ok, I really wanted to finish the 25 mile ride, but as long as I showed up the rest was considered buttercream on the cake.

What happened? I showed up at 7:15, wearing my padded bike shorts and a bottle of water, I rode to the turn-around point and kept riding. I was feeling good, I was in no hurry, I chose easy gears to keep my cadence up, a girl has knees to protect after all. I rode all by myself, on my terms. I made it to the second rest station and realized there were only a few miles left. Of course they were into a slight head wind but it was flat and the most beautiful fall day at the beach. I kept going. I made it! I met new people, I had fun and I didn’t shave my legs.

Sometimes the most difficult part is showing up and ignoring the voices in our heads. If the voices get too loud shove a grocery store cookie in their mouth, take a deep breath and just show up. You might even have fun!

I don’t remember getting any of my bicycles for Christmas but my friend told me the Outer Banks Womens Club will be buying some for local kids this year. I hope they enjoy the wind in their hair and the freedom I enjoyed. I could not find any pictures of my old bicycles, I always took one when they were shiny and new, but I did come across a clipping of a race for charity I was in with fellow club members. Yep, that’s a perm.

The Stories Behind the Quality Ingredients that Allow Us to Bake Love into Each Cookie
June 11, 2022

Looking at the World with Lavender-Colored Glasses
June 24, 2017